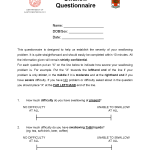 The Sydney Swallow Questionnaire (SSQ) is a 17 question, self-report inventory, which was developed to measure symptomatic severity of oral-pharyngeal dysphagia as reported by the affected patient. The questionnaire uses a 100mm long visual analogue scale (VAS) for all but one question.

Reliability and validity of the questionnaire

Normalized scores varied over time by -2% (95% CI: -11% – 7%) in neuromyogenic dysphagia. Factor analysis of the questionnaire identified a single factor, “dysphagia”, to which all 17 questions contributed significantly, and which accounted for 59% of total variance (p < 0.0001). Total score correlated highly with an independent global assessment severity score (r = 0.7; p < 0.0001). A mean 70% reduction in score (p < 0.0001) was observed following surgery in patients with Zenkers confirming responsiveness in this population.

Applied to patients with neuromyogenic dysphagia this inventory demonstrates: strong test-retest reliability as well as face, content, and

construct validity. Discriminant validity (responsiveness) has been demonstrated in a population with a correctable, structural cricopharyngeal disorder.

Administration of the questionnaire

by the investigator. The tool has been designed and validated as a self-report inventory whereby affected patients, with adequate cognitive function, read and respond to each question without interference once the concepts and purpose of it have been explained.

Marking and calculation of individual and total scores:

The score for each individual question is the distance in mm from the origin (left extremity) to the patient’s mark on the visual analogue scale.

The total score is calculated by summing the 16 individual VAS scores and the score for Q12 multiplied by 20. Thus converting the range of

possible scores for Q12 from 0-5 to 0-100, consistent with the remaining 16 questions, to yield a total score out of a possible maximum

The questionnaire was administered to 73 eligible nondysphagic individuals who had been screened for any dysphagia or conditions that might predispose them to dysphagia. The calculated upper limit of the reference interval was 234 and the SSQ scores in a nondysphagic population were not influenced by age or gender [2].